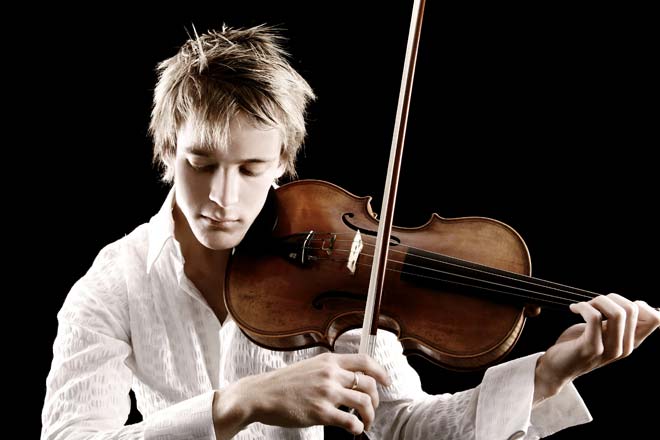 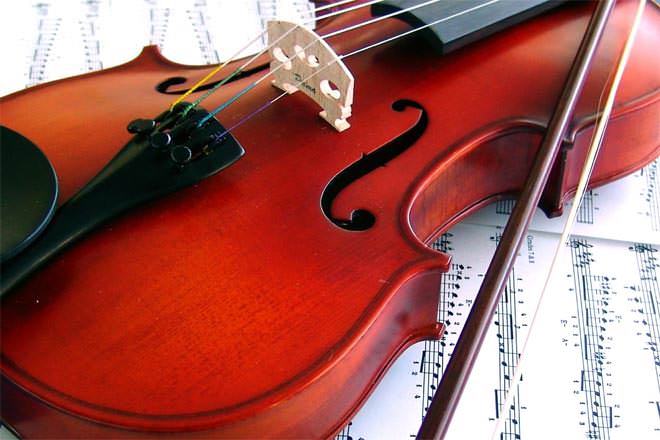 Violas are larger than violins and have a deeper, mellower sound. They are both orchestral string instruments that originated in Italy and are played with a bow. The violin is also called a fiddle when used to play folk music. 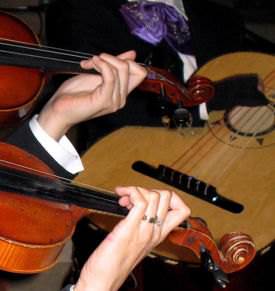 There is no standard size for a viola. The body of a viola is typically between 38cm and 43cm long.

A standard violin has a body that is 35.5cm long. However, violin bows are around 1 cm longer than viola bows.

Violas are the second highest pitched instruments in the string family. A viola’s typical sound is described as deep and mellow, and it generally has a slower sound than the violin due to its thicker strings.

Violins are the highest pitched instruments in the string family. Their sound carries above other instruments, making them popular for melody parts.

Viola strings are normally tuned to C3, G3, D4 and A4. A viola is tuned exactly one fifth below the violin. The viola has a range of over 3 and a half octaves, depending on the talent of the player.

Violin strings are turned to G3, D4, A4 and E5. Its pitch ranges from G3 to C8, the highest note on a modern piano. However, the top notes are often produced by harmonics, and so the E two octaves above the open E-string (E7) can be considered the practical highest note for orchestral parts.

Music for the viola is written in alto clef, which uses the C clef. The alto clef is rarely used by other instruments.

Music for the violin is written in treble clef.

Violins are plays with the left side of the jaw resting on the chinrest, with the violin supported by the left shoulder. The left hand presses the strings to produce pitch and the right hand either bows or plucks the strings to create the sound.

Viola player Clare Finnimore has this to say about the difference in technique (watch the video):

It is difficult to explain how the technique changes when you go from a violin to a viola but I think that when lots of violinists first pick up the viola, (plays) The bow stroke is much lighter on the violin. With the viola you need … (plays) it’s a firmer sort of bow hold, obviously the space between the notes is bigger, the neck is thicker, so all those things, you just have to sort of enlarge everything a little bit.

The bow is longer, it is heavier. Maybe you have to space your fingers out a little bit more on the bow in order to produce a sound. This is all very general, I think the most difficult thing is going back the other way if you play the viola and then you go back to playing the violin it can sound terribly sort of scratchy and shaky because your movements are too heavy and not delicate enough.

In early orchestral music, the viola filled in harmonies. However, some Baroque and Classical pieces were written for solo viola, and it plays an important role in chamber music, such as string quintets. Many composers now write for viola, and it is also used in contemporary pop groups such as The Velvet Underground and 10,000 Maniacs, and by folk musicians.

Violins have been popular instruments since the Baroque period. They are often used to play the melody line, as well as to harmonize. They are also used in jazz music and by many modern pop and indie groups, including The Corrs, Blue October, Yellowcard and Arcade Fire.

Compositions for the viola include Mozart’s Sinfonia Concertante and Kegelstatt Trio, Bach’s Brandenburg Concerto No 6, and Beethoven’s Serenade in D major.

Almost all orchestral or chamber music includes prominent parts for a violin.

There are countless significant modern-day violinists in both classical and popular music.

From Viola: A brief history - SoundJunction:

The viola dates from the same time as the violin, coming into existence in the early to middle 16th century. At first the viola was called the 'alto-tenor' violin, as the term 'viola' was used to refer to any Western classical stringed instrument that was bowed. But eventually the word 'viola' came to refer specifically to the viola da braccia (meaning the viola played in the arms), hence the German word bratsche that is still used for the viola today. Around about the 17th century some ‘tenor-violas’ were made which were very long, but this type of viola was rarely played, although some examples survive. In the late 18th century the viola emerged from being the instrument which just 'filled in' in the middle of an ensemble. Some composers even began to write concertos for it. This increasing prominence led to experiments to try and improve the viola, but it wasn't really until the 20th century that the most successful steps forward were made. The main mover in the viola's development was the viola-player Lionel Tertis who collaborated with the instrument-maker Arthur Richardson from about 1937 to try to create the ideal viola. 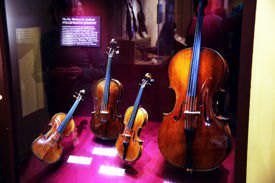 Other instruments in the violin family derived from viola are:

Based on the origin of instruments names, one of the theories states that violas came before the other string instruments. The modern viola was probably developed in Italy in the 16th century.

The modern violin was developed in the early 16th century Italy by Andrea Amati and Gasparo da Salò. It was modified again in the 18th and 19th centuries.

Something sounds wrong to me :
''viol+on +cello - the smaller bass viola (smaller than violin)'' ??