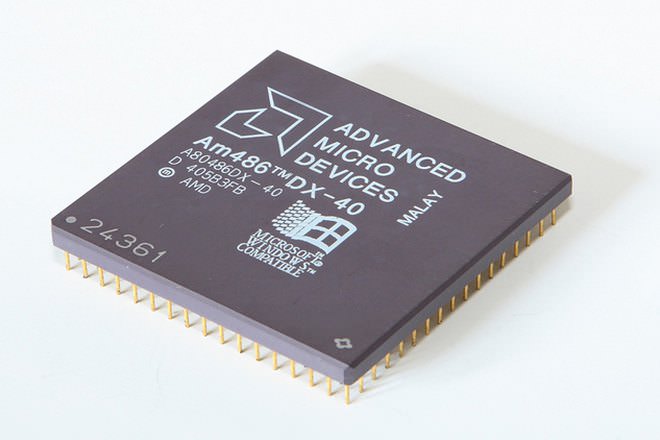 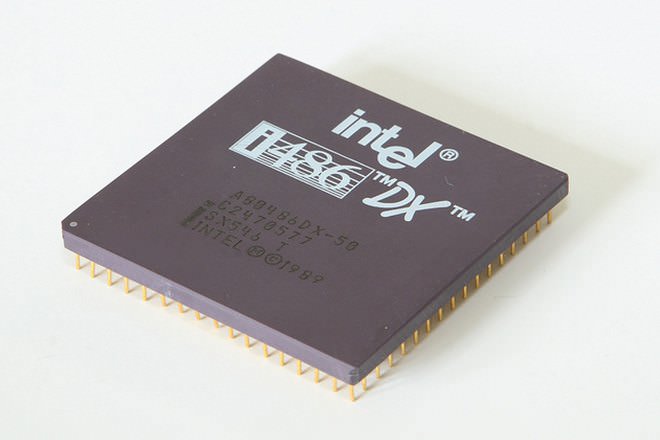 AMD or Advanced Micro Devices is a company that has been producing semiconductors, microchips, CPUs, motherboards, and other types of computer equipment for the last 40 years. That makes them the second largest company in this sector currently after Intel.

Intel, or the Intel Corporation, was founded a year earlier in 1968. Both companies were incorporated in Valley in the USA, and are leaders in research and development in the field. These multinational companies are also well known for developing production facilities in Asia, such as in Taiwan, China, Malaysia, and Singapore. Nevertheless, it is said their products are in use in every country where PCs are used.

Both AMD and Intel produce mother boards which are the circuitry at the base of all personal computers. AMD and Intel also create CPU or Central Processing Unit chips for the personal computer. While both are in the same industry but are always vying against each other for marketshare and technological changes.

You can compare AMD and Intel processors on Diffen.

The product line of Intel comprises of:

Microprocessors: The Pentium line, Celeron and Core. Latest innovations include the Core i7-980X Extreme Edition with 6 physical and 12 logical cores. Servers: Intel has chipsets, motherboards, software, memory and many more solutions for servers.

Motherboards: Intel Serverseries and Intel Workstation series for servers and the Intel Desktop board for Desktops. Others: Intel manufacturers many communication and memory solution equipment and software for Desktops and Notebooks also.

Servers: Processors of the Opteron like are available for servers also.

Motherboards: The AMD Crossfire series are available in this line along with many others.

Others: AMD recently acquired a leading video card manufacturer and is promising more advanced video capabilities coded into new versions of their motherboards. It also offers software and memory solutions for businesses.

AMD is said to offer the same basic product at a cheaper price than Intel. Intel is established as the market leader in producing motherboards and processing chips for personal computers, and their prices and development have influenced AMD from the start. AMD produced “clones” of Intel products as well as their own line of chip and motherboard development. The AMD Athlon XP processor runs very close to an Intel 4 processor and is about half the price. Some price comparisons of similar products by the two companies are listed below:

The Nineties This is where home computers began to really have the "juice" to wow people. Intel brought out the Pentium followed by the Pentium MMX, Pentium 2, and the Pentium 3, and all were huge hits. AMD got into the high-power game with several RISC CPUs which would interpret x86 instructions: K5, K6, and Athlon. The Athlon got them into a serious battle with intel over CPU supremacy, which pretty much brings us to our current situation - Everyone making a significant CPU today has enough power to stay in the race. 1991: Am386 (AMD) Breaks the intel 32 bit x86 monopoly. 1991: 486SX (Intel) 486 processor with no onboard FPU. Introduced as a low-cost budget processor; originals are actually remarked 486DX chips with faulty FPUs disabled. (April 22, 1991) 1993: Pentium P54C (intel) Intel begins to use some RISC style processing. First superscalar x86-family processor. 1993: Am486 (AMD) 1995: Pentium Pro (intel) A great deal of added cache. Sets the stage for the Pentium 2 (whose design is largely based on the PPro) and Pentium MMX (P55C). 1996: K5 (AMD) AMD's first Internally-RISC x86-compatible processor. Basically a 486 on steroids, and intended to compete with the Pentium. (March 27, 1996) 1997: Pentium MMX P55C (Intel) Pentium with MMX added. 1997: Pentium 2 (Intel) Based on the Pentium Pro, and carrying the MMX features of the P55C. First x86 processor on a module, with cache on the PC board. (All former x86 CPUs utilize L2 cache on the motherboard.) 1997: K6 (AMD) First Pentium 2 competitor, based on a RISC design with an x86 translation layer. Suffers due to slow and incompatible (24 as opposed to 32 bit) FPU. (April 2, 1997) 1998: Pentium 2 Xeon (Intel) Where the P2's L2 cache runs at half speed, the Xeon's runs at full speed, and is available from 512 kb to 8 mb. 1998: Pentium 2 Deschutes (Intel) Process shrink to .25µm. 1998: K6-2 (AMD) Updated version of K6 CPU with multimedia functions ("3DNow!") and a 32-bit FPU. (May 28, 1998) 1999: Celeron (Intel) Bargain version of the Pentium 2. Early versions have no L2 cache; Later versions have a reduced amount of L2 (128kb) which runs at full speed rather than the P2's half speed. 1999: Pentium 3 (Intel) Based on the P2's design, new core. Substantially faster than P2. Adds additional SIMD extensions beyond MMX. 1999: Athlon (AMD) AMD's competitor to Pentium 2. Features 100MHz DDR bus for three times the bus bandwidth of intel CPUs (compared to then-current 66MHz Pentium 2 bus.) Intel Pentium chipsets later feature 100MHz bus (non-DDR.) 1999: K6-3 (AMD) Last revision in K6 line, improves speed of multimedia functions and makes new clock rates available. The 2000's Now, in the 21st century, the race continues. AMD and intel have essentially equivalent juggernauts which for the first time (Beginning in the 90s with the coexistence of Pentium 3 and Athlon) compete directly and strongly with one another. Meanwhile, both companies have 64 bit designs with instruction sets based on x86, and the outcome of that match is as unclear as the outcome of Pentium 4 vs. Athlon XP. 2000: Pentium 4 (Intel) Less efficient than P3 cycle for cycle, with a harsher penalty for incorrect branch prediction (due to a longer pipeline), but supports much higher clock rates partly due to finer (.18 micron) process and partly due to the longer pipeline. Bus speeds increase to as much as 533MHz in order to compete with Athlons. 2000: XP and Athlon MP (AMD) Full speed L2 cache, and a new 133MHz DDR bus (equivalent to 266MHz.) MP is "designed" for multiprocessor use. 2001: itanium (Intel) Intel's first 64 bit CPU. Low clock rates (through 2002) but true 64 bit. Computing(EPIC). Uses a new instruction set, IA-64, which not is based on x86. Extremely poor at emulating x86. 2002: itanium 2 (Intel) Supports higher clock rates than itanium and has a shorter pipeline to reduce the cost of a bad branch prediction. 2002: XScale (Intel) StrongARM II. Tight, fast embedded processor which uses the ARM instruction set. Based on StrongARM, which was purchased from Compaq after they acquired Digital, who made the chip in conjunction with Acorn. (See StrongARM, above.) 2003: Opteron/Athlon 64 (AMD) AMD's x86-64 processors, collectively code named "Hammer". Opteron has more cache and two hypertransport (HT) links per CPU, allowing for glue-less SMP; Athlon 64 has one. A mobile (low power) version is also available. There are a number of revisions, starting with "ClawHammer" (130nm) Memory controller is on-die, so hypertransport only has to handle communication with peripherals, and memory attached to other CPUs. (NUMA architecture.) 2003: Pentium M (Intel) See also: Centrino. Formerly code-named Banias, this is an advanced low-power rehash of the Pentium 3 processor, more efficient than Pentium 4. Intel announced that multi-core Pentium M processors would take over for the P4, whose scalability is running out. 2004: Athlon XP-M (AMD) Low-power version of the Athlon XP processor, the slowest (2700+) part draws 35W with 512kB L2 cache. 2005: Athlon 64 X2 (AMD) First dual-core 64 bit desktop processor.

AMD has a long history of litigation with former partner and x86 creator Intel. In 1986 Intel broke an agreement it had with AMD to allow them to produce Intel's micro-chips for IBM; AMD filed for arbitration in 1987 and the arbitrator decided in AMD's favor in 1992. Intel disputed this, and the case ended up in the California. In 1994, that court upheld the arbitrator's decision and awarded damages for breach of contract. In 1990, Intel brought a copyright infringement action alleging illegal use of its 287 microcode. The case ended in 1994 with a jury finding for AMD and its right to use Intel's microcode in its microprocessors through the 486 generation. In 1997, Intel filed suit against AMD and Corp. for misuse of the term MMX. AMD and Intel settled, with AMD acknowledging MMX as a trademark owned by Intel, and with Intel granting AMD rights to market the AMD K6 MMX processor. In 2005, following an investigation, the Japan Federal Trade Commission found Intel guilty on a number of violations. On June 27, 2005, AMD won an antitrust suit against Intel in Japan, and on the same day, AMD filed a broad antitrust complaint against Intel in the Court in Delaware. The complaint alleges systematic use of secret rebates, special discounts, threats, and other means used by Intel to lock AMD processors out of the global market. Since the start of this action, AMD has issued subpoenas to major computer manufacturers including Dell, Microsoft, IBM, HP, Sony, and Toshiba.

Intel is the inventor of the x86 series of Microprocessors and today both AMD and Intel are competitors at this. While Intel is said to be the largest producer of x86 based processors in the world, AMD is number two in it. Intel came out of 2006 with 77.7 per cent of the x86 CPU market, up from 76.3 per cent. Its 1.4 percentage point gain matched a 1.4 percentage point decline in AMD's x86 market share, which fell from 2005's 23.7 per cent to 22.3 per cent.

Maybe in the cost section you should list processors with the same number of cores.

Actually, neither set of retail chips can boast a "true" 64-bit processor, as a true 64-bit chip would not be able to run 32-bit applications due to the differences in addressing space and word structure, the "64-bit" chips AMD and Intel advertise end up more like "40-bit" when the bits used to allow backward compatibility with 32-bit word sizes are discounted. This is also a factor in why "64-bit" applications are not generally that much faster than their 32-bit counterparts (barring some programs that make use of clever caching and I/O management), as the amount of extra data that can be processed in one of these backward-compatible 64-bit words is minimal, although of course, there are many other benefits other than increased word size to using 64-bit processing, such as the commonly cited increase in memory capacity available to a system (around the region of 16-17TB theoretically if I remember correctly).

I bought AMD motherboards/processors because of the lower price (3 or 4 years ago). What I have found is that they are much more difficult to use. The only way I can get them to work is to put the hard drive in an intel computer, load the operating system, then transfer the HD to the AMD machine. (I am an amateur so maybe there is a trick I am missing).