This is an unbiased comparison of the policies and political positions of Beto O'Rourke and Ted Cruz, the Democratic and Republican candidates for the 2018 Senate election in Texas. Ted Cruz is the incumbent seeking reelection; Beto O'Rourke is a Congressman representing Texas's 16th congressional district.

Ted Cruz is projected to win the race and O'Rourke has conceded.

Interestingly, neither candidate goes by their legal name. Ted Cruz was born Rafael Edward Cruz and Beto O'Rourke's birth name is Robert. While O'Rourke is Irish-American, Cruz is Cuban-American; but O'Rourke is fluent in Spanish while Cruz is not.

Ted Cruz was born in Calgary, Canada in 1970 to first-generation Cuban-American parents. He studied at Princeton University and Harvard Law School. He is currently a senator from Texas, a position to which he was elected six years ago. Prior to that, Ted Cruz has worked as Solicitor General of Texas, an adjunct professor at University of Texas School of Law, domestic policy advisor to George W. Bush on his 2000 presidential campaign.

Beto O'Rourke was born in El Paso in 1972. He attended Columbia University and graduated with a degree in English Literature. He was in a band in college. After college, he worked at an Internet service provider in New York, then returned to El Paso and founded a software company, which his wife now runs. He has been a Congressman for the last six years—the same time that Cruz has been a senator.

In 1998 O'Rourke was arrested on a DWI charge for drunk driving. After he completed a court-recommended DWI program, the charges were dismissed and he went on to have a successful career, including on the El Paso city council from 2005 to 2011.

O'Rourke has criticized President Trump for tariffs his administration has imposed on China, citing that retaliatory tariffs from China are hurting Texan farmers and businessmen. He has said the U.S. should support unionization of workers in Mexico so that American workers can become more competitive with them.

Cruz has also said that he favors free trade but has not directly addressed China tariffs.

Beto O'Rourke has criticized the 2017 tax cuts, labeling them a giveaway for corporations and wealthy individuals. Even though tax liability is likely to go down for all Americans after the bill takes effect, corporations and high-income households will see a much bigger reduction in their tax bill. O'Rourke has said that income inequality is at its highest level in about 100 years, and that the government will be unable to balance its budget after these tax cuts.

Cruz has said that the tax cuts are one of the big successes of the Republican administration since President Trump was elected. He credits the tax cuts for the strong economy, 4 million jobs added, and low unemployment. Cruz has said "When you cut taxes, when you simplify the tax code, when you lift the burden on small businesses,... it expands jobs, it expands opportunity."

Philosophically, Cruz is a libertarian and has a long anti-tax track record, including:

Cruz's philosophy is that while he is against having a large national debt, the only way to pay that down is through economic growth — and that the way to achieve economic growth is lower taxes.

As a Democrat, O'Rourke philosophy is to have a progressive tax system i.e., the tax rate increases on marginal income as income levels rise. He considers the flat tax to be regressive and believes that wealthier people should pay a higher portion of their income in taxes. O'Rourke has also criticized the December 2017 tax cuts saying they add to the federal government's budget deficit, and their benefits flow disproportionately to corporations and wealthy individuals, increasing economic inequality that is already at record high levels.

Ted Cruz has been vehement in his opposition to regulations. As an avowed libertarian, he has said he prefers more freedom and less regulations for businesses to thrive and for the economy to be strong.

Beto O'Rourke is in favor of expanding family leave and the progressive policy of rural broadband expansion. His economic policy proposals also mention lowering the barrier to entry for small businesses, which is often another way of saying deregulation. His proposals also include supporting stronger antitrust laws to promote competition.

Ted Cruz has criticized the Affordable Care Act—aka Obamacare—on two fronts: rising premiums, and the fact that President's Obama's assurances that if you like your health plan you could keep it turned out to be misleading. He has said that he supports the most popular healthcare reform introduced by the Affordable Care Act—coverage for pre-existing conditions.

Beto O'Rourke has said that you can't repeal Obamacare and still keep coverage for pre-existing conditions. He has expressed support for universal healthcare and said that he believes healthcare is a human right, but has not publicly supported Medicare for all. He wants to protect the Affordable Care Act and expand Medicaid. He has expressed disappointment that the sate of Texas "left $100 billion dollars on the table" instead of working with the federal government to expand Medicaid.

Other positions of the two candidates on healthcare are as follows:

Bet O'Rourke has been unequivocal in his support for Roe v. Wade. He supports “policies that guarantee a woman’s access to birth control and emergency contraception.” He has said his goal is “ensuring that a woman’s right to choose is not compromised by limited access to safe and legal abortion services or family planning help.”

Ted Cruz is on the opposite end of the spectrum when it comes to abortion. He wants to overturn Roe v. Wade and ban abortions, with no exceptions (not even exceptions for rape and incest). He has said Planned Parenthood should be defunded and prosecuted.

Another area of stark contrast between O'Rourke and Cruz is civil rights and issues related to African-Americans. O'Rourke has said that NFL players who take a knee during the national anthem are protesting social injustice and that he does not find it disrespectful because it is a non-violent, peaceful way of trying to appeal to the nation's conscience about the fact that unarmed black people are being killed in large numbers, often by law enforcement.

When asked about law enforcement killing unarmed African-Americans during the first debate, Ted Cruz chose to focus instead on the death of police officers who are shot and killed in the line of duty. He has also criticized NFL players who kneel during the anthem because he says they are disrespecting the national flag.

O'Rourke has said he supports granting citizenship to "DREAMers"—undocumented immigrants who were children when they entered the United States illegally and who meet other criteria of the DREAM Act, such as having no criminal record. Ted Cruz has said he opposes a path to citizenship for DREAMers.

The divide between the two candidates goes deeper. Cruz has said his immigration policy is "Legal good; Illegal bad." He is in favor of building a wall along the southern border. Cruz also wants to deport all undocumented immigrants (an estimated 11 million people) while O'Rourke has said he supports creating a way for them to earn citizenship.

O'Rourke is also against the border wall. He has criticized wall proposal for seeking to use eminent domain to build the wall over private property instead of the actual border between the U.S. and Mexico. O'Rourke has also called for ending "the militarization of our immigration enforcement system", and closing "private immigration prisons and detention centers that are locking up families."

When specifically asked about border control and security during their second debate, O'Rourke cited his work with Republican senator John Cornyn to "invest in our ports of entry", staffing customs offices and investing in technology to do a better job screening those who are trying to enter the country. He also mentioned that his hometown of El Paso is one of the safest in the country despite being close to the border and having a large immigrant population. But O'Rourke did not talk about specific border security measures that he supports.

Ted Cruz is a supporter of building the border wall. He has been endorsed by the National Border Patrol Council, a labor union of employees of the U.S. border patrol.

Both O'Rourke and Cruz have said that they are gun owners and that they support the Second Amendment i.e., the right to bear arms. But O'Rourke has an "F" rating from the NRA while Cruz has an A+ rating from that organization.

Ted Cruz is opposed to any gun control measures. He has said that his solution to gun violence and mass shooting in schools is to fund security measures like metal detectors and armed police guards in schools.

O'Rourke has said that he supports universal background checks and banning "weapons of war" like the AR-15 that have "high-impact, high-velocity rounds" and are designed with the express purpose of killing as many people as possible, as effectively and efficiently as possible. O’Rourke supports background checks for all gun sales, closing the "gun show loophole", and ending concealed carry reciprocity.

Ted Cruz supported and defended the nomination of Supreme Court justices Neil Gorsuch and Brett Kavanaugh. On Roe v. Wade and other issues, Cruz has said we'll have to wait and see when cases are decided. Philosophically, Cruz has said he believes judges should only interpret the law and if we want to change laws, it should be done via Congress.

O'Rourke has said he would only support judges who "believe in civil rights", "believe in voting rights" and "who will vote in favor of the people, and our needs -- not in favor of corporations, not special interests, not the political action committees.". He has also said, "I would only vote for a Supreme Court justice who believes in a woman's right to make her own decisions about her own body."

Ted Cruz has said that climate change is a myth and "pseudoscientific theory". He voted against the Clean Water Rule, and voted for bills to block the EPA’s restrictions on carbon pollution from existing power plants. When asked about climate change during their second debate, Cruz has said environmental regulations are about government power to dictate what happens in the economy, and voiced opposition to regulations and to the Paris climate accord.

The first televised debate between Cruz and O'Rourke took place on Sep 21, 2018. The full video is below:

The second debate took place on Oct 16. Here is the full video: 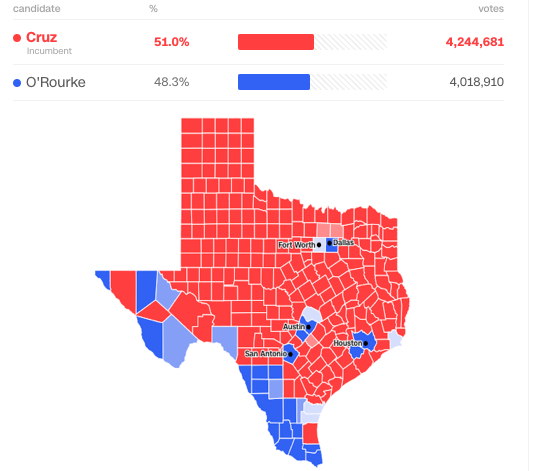 Election results with vote counts and by county

Texas is a red state and hasn't elected a Democratic senator in decades. So it is unsurprising that Ted Cruz has been consistently in the lead in opinion polls in the state.

Results of various opinion polls for the Texas senate race are summarized below. As a point of reference for comparison, we can look at the 2012 race when Cruz was first elected. In that race, voter turnout was 49.7%; Cruz got 56.6% of the popular vote and his Democratic rival (Paul Sadler) got 40.5% of the popular vote.