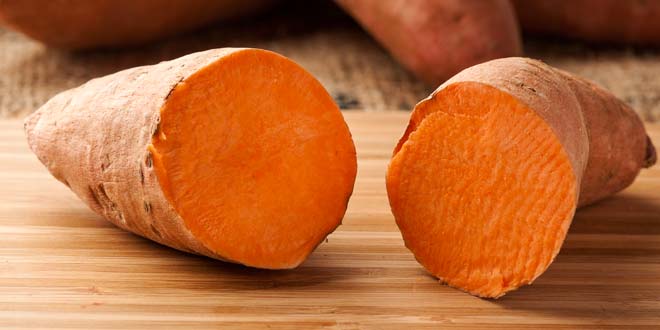 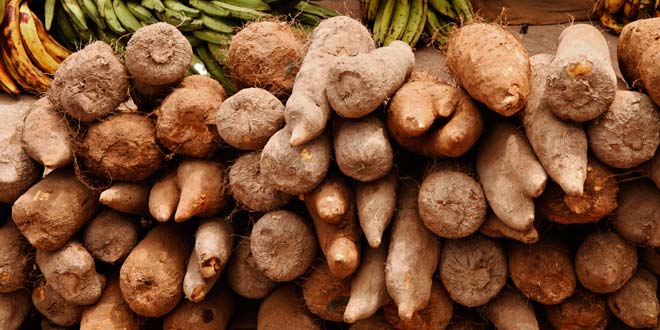 Though sweet potatoes and yams are both root vegetables, they taste different, have different nutritional qualities, and come from different plant families. The sweet potato is from the Convolvulaceae family; it is a dicot that is related to flowering morning glory plants. The yam is a monocot from the Dioscoreaceae family that is related to lilies and grasses. In Canada and the U.S., sweet potatoes and yams are sold in most grocery stores and are very popular during both American and Canadian Thanksgiving; however, what is labeled as a yam is often just a soft, orange-fleshed sweet potato.

Most yams have a drier, potato-like starchiness than most sweet potatoes, which tend to have a rich flavor and, in some cases, creamy texture. However, with a wide variety of both yams and sweet potatoes in existence, there is considerable overlap when it comes to flavor and texture.

Sweet potatoes, especially orange-fleshed sweet potatoes, are almost always sweeter than yams, but both vegetables are versatile and can have their flavors and textures altered depending on the method of cooking and ingredients used with them. It is common for both to be baked, roasted, grilled, boiled, fried, or cooked in a variety of other ways. They can be made into main dishes, side dishes, or desserts.

The following video gives a brief history of yams and shows purple yams being used in Jamaican home cooking.

In Canada and the U.S., two main varieties of sweet potato are sold: one that is golden-skinned and white on the inside and one that is pink-skinned and orange on the inside. Both are around the size of regular potatoes, though usually skinnier and with tapered ends. Firm, white-fleshed sweet potatoes are starchier and more potato-like than soft, orange-fleshed sweet potatoes, which are more likely to be mislabeled as yams. (When both varieties of sweet potato were first commercially sold in North America, producers wanted a simple way to differentiate between the two, and so began calling the soft, orange-fleshed variety a "yam," as some West African slaves did.)

Yams have greater variance in their appearance than sweet potatoes do. Some yams are the size and shape of small potatoes, while others can grow up to 1.5m (nearly 5ft) in length and weigh over 100lbs (70kg). On the outside, their skins may be dark brown or light pink, while on the inside, their flesh is usually white or yellow, with some occasionally having purple or pink flesh.

Like many root vegetables, yams and sweet potatoes are important in food insecure areas, especially those affected by seasonal droughts or rains, because they can be stored for long periods of time without needing to be refrigerated. The nutritional value of the root vegetables makes them important as well.

Sweet potatoes and yams can be eaten by vegans and paleo dieters, but paleo dieters who are also trying to lose weight by cutting carbs are told to eat both vegetables in moderation or not at all. Having lots of carbs can be helpful to others, though, such as those who are bodybuilding.

Individuals with diabetes should be able to eat both vegetables, provided they are boiled. The cooking method used changes the glycemic index rating, as do additional condiments. Boiled sweet potatoes and yams have relatively low GI ratings (44 and 35, respectively), while peeled and baked sweet potatoes have a high GI rating (94), as do peeled and roasted yams (77).

Where Yams and Sweet Potatoes Are Grown 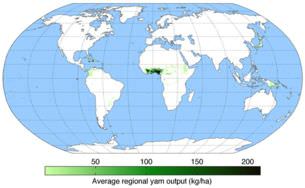 Most yams are grown in West Africa.

There are hundreds of yam varieties, but most were originally native to Africa and Asia. Today, yams are grown around the world, but West Africa is still where most yam crops—nearly 95%—are grown. Yams are less commonly grown or even sold in North America, where sweet potatoes are prominent.

There is a long history of confusing yams for sweet potatoes and vice versa.