Brief Introduction to the Chromosome

A chromosome is a double-helix structure that houses DNA and protein in cells. It is a strand of DNA that contains genes found in living organisms. It also contains proteins, which help package the DNA and control its functions. A homologous chromosome is a chromosome pair of the same length, centromere position, and staining pattern with genes for the same characteristics at corresponding loci (location).

All animal cells have a fixed number of chromosomes in their body cells which exist in homologous pairs (2n). Each pair of chromosomes consists of one chromosome from the mother and the second from the father. During the process of meiosis (cell division for sexual reproduction), the sex cells divide to produce "gametes" which then contain only one set of the chromosomes (n).

Which Cells are Haploid? 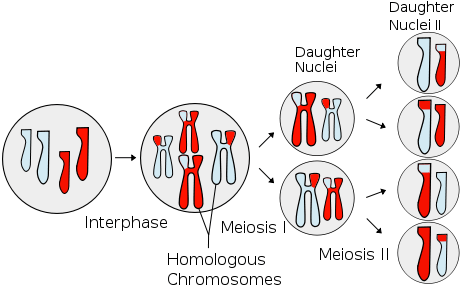 Haploid cells being produced via the process of meiosis. Note how each cell ends up having half the number of chromosomes as the parent cell.

During the process of reproduction, haploid cells (male and female) unite to form a diploid zygote. Cell growth is the result of mitosis; it is a process by which mother cells divide to give rise to identical daughter cells with equal number of chromosomes. This process differs slightly in different types of cells, animal cells undergoing "open" mitosis with the breakdown of nuclear membrane, whereas organisms like fungi and yeast undergo closed mitosis with an intact nuclear membrane.

Polyploidy refers to a state where multiple sets of chromosomes are present. This is commonly seen in plant cells but not in animal cells.

A spermatogonium (primordial germ cell) is a good example of a diploid cell.

In animals, haploid cells are found in the sex cells. Male bees, wasps, and ants are haploid because of the way they develop: from unfertilized, haploid eggs.

These videos explain the differences between haploid and diploid cells:

This video from Khan Academy explains the concepts in more detail:

thank u thank u, far too kind

How about the length of DNA in each one?

Thank you so much ,it was so helpful