In general, men are more likely to suffer from gout, and women are very slightly more prone to pseudogout. Both conditions are common in the elderly, with pseudogout often affecting a knee, while gout usually affects a big toe.

Symptoms of Gout and Pseudogout

Differentiating between gout and pseudogout by symptoms alone is difficult, if not impossible, in most cases. Both disorders cause acute arthritic attacks that include the following common symptoms:

Since gout and pseudogout are types of arthritis, many of these symptoms are also shared with osteoarthritis, rheumatoid arthritis, and psoriatic arthritis.

Examples of gout affecting the feet and hands. Note that the hand in the center is likely simultaneously affected by another type of arthritis, such as rheumatoid arthritis, and gout, which causes the large swelling. Click to enlarge.

Which Joints Are Affected?

While gout and pseudogout can technically affect any joint, they tend to affect specific joints, particularly during the first arthritic attack. Pseudogout is most likely to affect the knee joint first, but may also affect wrists, ankles, or shoulders. Gout affects the joint in the big toe in about 50% of all cases, but it may affect heels, ankles, knees, wrists, and/or fingers, too.

There are acute and chronic forms of gout and pseudogout. Acute cases may be infrequent but more painful. Chronic cases may be inconvenient but less painful or even painless over time. This does not mean someone experiencing symptoms should not get diagnosed and treated, however, as untreated gout can lead to a number of health complications.

How long an acute arthritic attack lasts can vary from person to person. Most gout and pseudogout attacks will clear up in 5 to 12 days, but the length of an attack may increase with age and last for weeks or a month, or, as mentioned, become a chronic condition.

What Causes Gout and Pseudogout?

The most significant difference between pseudogout and gout is the underlying causes of pain. Both disorders are caused by crystalline buildups in the joints that fall under a category of inflammatory arthritis known as crystal arthropathy. While gout is caused by an overabundance of crystalline monosodium urate (MSU, or uric acid) deposits in the blood and joint fluid, pseudogout is related to the abnormal buildup of crystalline calcium pyrophosphate dihydrate (CPPD) deposits in joint cartilage and fluid.

CPPD buildup is known as chondrocalcinosis, and elevated uric acid levels are known as hyperuricemia. Age is one of the biggest factors in developing either — a majority of the elderly population has one or the other, or both — but only some cases of chondrocalcinosis or hyperuricemia ever result in a pseudogout or gout attack.

Gout is moderately better understood than pseudogout. Uric acid is produced when purines, which exist in the body and in foods, are metabolized. When the body later fails to metabolize uric acid or, alternatively, fails to filter it through the kidneys, gout can be the result.

Because gout is at least partially associated with obesity and diets heavy in meat, fruit sugar (fructose), and/or alcohol (particularly beer) — all foods and drinks that were once, and sometimes still are, a luxury only the wealthy could afford — gout is sometimes called "the rich man's disease." But diet is only one possible reason a person might struggle with gout, and it usually is not the only reason.

Certain ages and sexes are at higher risk for getting gout or pseudogout. Joint trauma (e.g., caused by surgery), medications, a family history, and other medical conditions can play a role in the development of these conditions as well. Diabetes, metabolic disorders, and kidney disorders or failure are related to both gout and pseudogout, and underactive or overactive thyroid and mineral imbalances, particularly of iron or magnesium, are specifically related to CPPD buildup in cases of pseudogout.

Symptoms are not enough for a doctor to differentiate between pseudogout or gout with confidence. Several tests can be performed to determine what is causing joint pain. 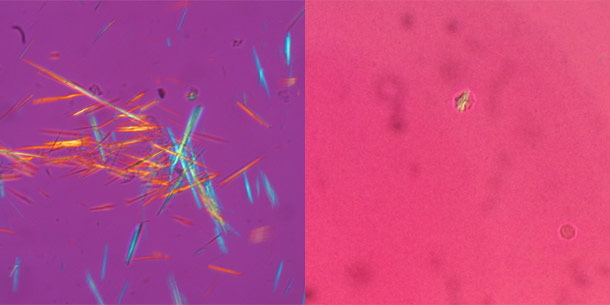 Gout crystals (left) and pseudogout crystals (right) under the microscope. Urate crystals have sharp, needle-like ends, while CPPD crystals are shaped more like rods or rhombuses.

There is no cure for either form of arthritis, but medications can be used to treat symptoms and reduce the severity of inflammatory attacks. With gout, lowering uric acid levels is key. In contrast, treating pseudogout may be more complex, depending on any underlying conditions (e.g., hyperthyroidism).

In the case of gout, failure to treat long-term, elevated uric acid levels can result in kidney damage and the development of tophi, hard nodules of crystals that sometimes come to the surface of the skin.

The whitish markings on the surface of this gouty elbow are tophi.

Because gout and pseudogout are largely associated with age, prevention of these disorders is difficult, if not impossible. Further complicating matters is the fact that doctors are not yet sure why only a fraction of those with uric acid or CPPD buildups ever experience an arthritic attack.

As is the case with most illness prevention, a healthy diet, exercise, and proper diagnosis and treatment of any other health problems will likely go a long way to preventing gout and pseudogout.

Age is a big factor in the development arthritic disorders. Most people will not develop either of these conditions until after the age of 60, but it is possible to develop them between the ages of 30 and 60 as well.

Men have higher levels of uric acid and are more likely to develop gout than women until around age 50, when women tend to develop menopause, at which point women's uric acid levels increase to a level similar to men's. Gout is also more common in blacks than in whites due to genetic factors. Meanwhile, pseudogout affects men and women almost equally, with women only being very slightly more likely to suffer from pseudogout.

Gout has become more common in places like the U.S., where diets, obesity, hypertension, and alcohol consumption increase the chance of developing the disease. In general, people who struggle with other illnesses or obesity are at higher risk for pseudogout and gout. And pseudogout is frequently coupled with osteoarthritis and other joint disorders, increasing the importance of proper diagnosis.