This is an unbiased comparison of the proposed tax plans released by Hillary Clinton and Donald Trump. In many ways, their tax policy aligns broadly with the platform of their political party — Clinton wants high-income earners to pay a larger percentage of their income in taxes, while Trump wants to cut taxes for all income levels.

We look at not only the specific proposals of each candidate's tax plan but also the impact these proposals will have, as estimated by third-party analysts.

For a detailed comparison of both candidates on all issues in the campaign, see Hillary Clinton vs Donald Trump.

Update Aug 12, 2016: On August 8, Trump delivered a speech in Detroit outlining a revised economic policy and new tax proposals that are different from what he had proposed earlier. This comparison was written before this speech so we have included both his old and his new proposals. However, the Trump campaign has removed from their website some documents that we had referenced (and cited) to describe his earlier proposals.

A majority of proposals by both candidates revolve around income taxes levied on individuals. The tax system in America is progressive. This means that as annual income rises, a larger portion of that income is required to be paid in taxes. e.g. for single filers in 2016, the tax rate on the first $9,275 of income is 10% but it rises to 15% for income between $9,275 to $37,650, and keeps rising up to a maximum of 39.6% for $415,050. 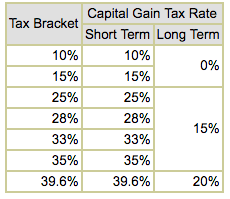 However, there are some "loopholes" in the tax code where certain types of income is taxed at a lower rate. e.g. income from long-term capital gains is taxed at a maximum of 20% even if that income is millions of dollars. Some critics argue that this discrepancy between the tax rates on labor/wages and investment income is unfair. It's the reason why Warren Buffett pays lower portion of his income in taxes than most of his employees.

Clinton's proposals are mostly about closing these "loopholes". Highlights of her tax plan include:

Taxes are a complex issue. For example, not everyone agrees that a lower tax rate for capital gains is a loophole. Similarly, taxing income from dividends can be considered double taxation because dividends are company profits distributed to shareholders. Companies have already paid taxes on their income, and dividends are distributed from the company's net, after-tax income.

The Republican view on taxes is that lower taxes stimulate economic activity. This in turn results in higher revenue for the federal government because the pie is larger, even though the government's share of the pie is smaller.

Republicans call the estate tax the "death tax" because it is levied on an individual's estate upon his or her death when the wealth is inherited by heirs. The tax is the subject of much debate among economists and policy analysts. Several prominent arguments for and against the estate tax are summarized here.

Donald Trump, like most Republicans, wants to repeal the estate tax. In contrast, Hillary Clinton wants to raise this tax. Currently estates smaller than $5.45 million are exempt from the estate tax; wealth over this amount is taxed at 40%. Clinton first proposed a higher tax rate (45%) and a lower threshold ($3.5 million) for applying the tax.

Analysts have argued that increasing taxes as proposed by Clinton will not increase revenue for the government because virtually all large estates will find ways to avoid this tax through judicious estate planning.

Corporate income taxes are a big source of revenue for the federal government. Both candidates have some proposals to tweak the corporate tax system.

Highlights of Clinton's proposals for corporate taxes include:

Highlights of Trump's tax plan for companies include: 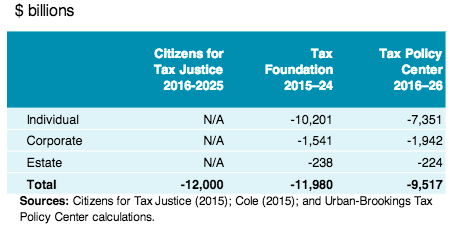 Several third-party analysts have estimated the impact of Trump's plan over 10 years. Estimates range from $9.5 to $12 trillion revenue loss.

But that is not the full story. Trump's proposals would stimulate the economy, grow GDP and create more jobs; and supporters argue that this economic growth would compensate for the reduction in revenue. In simple terms, the pie will grow so even with a smaller share the government will not lose revenue.

While there is definitely merit to this argument, The Tax Foundation, a conservative-leaning research firm, has calculated that even accounting for this growth, the tax plan would cost over $10 trillion dollars over 10 years. This revenue deficit would directly increase the national debt.

Clinton's tax plan is not without its flaws either. Raising taxes, while it raises government revenue and helps reduce government debt, has a chilling effect on the economy. The Tax Foundation estimates that Clinton's plan would lower after-tax incomes of all taxpayers by at least 0.9%, and reduce GDP by 1% over the long-term. 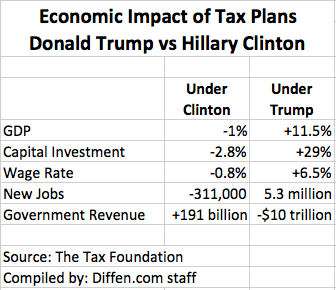 The economic impact of tax plans proposed by Hillary Clinton and Donald Trump, as estimated by the Tax Foundation

Critics have called Clinton's profit-sharing plan complex and gimmicky. The plan suggests that after two years, "companies that have established profit sharing plans and enjoyed the benefits of them would no longer need the credit to sustain the plans." There is no evidence to indicate that this would be the case. It also offers no ways to fund the tax credit. Further, it smacks of too much government interference in how private companies structure compensation for their employees.

Another problem with Clinton's proposals on taxing capital gains is the sheer complexity it introduces. It's easy today for investors (and their brokers) to divide their capital gains into short-term and long-term based on whether the assets were held for more than one year. Dividing that into 7 different tiers would increase reporting complexity for financial institutions and tax filing complexity for individuals.

Moody’s Analytics, a subsidiary of the credit rating and research agency Moody’s Corp., has analyzed the economic policy proposals of both Clinton and Trump. The lead author of this analysis is Mark Zandi, a registered Democrat who has donated the maximum allowable amount of $2,700 to the Clinton campaign but who advised Republican Sen. John McCain in the 2008 presidential race. Mr. Zandi has predicted a Clinton victory since August 2015, so his bias must be noted.

The analysis by Moody's concluded that if all of Clinton's economic proposals were enacted, the economy would create 10.4 million jobs during her presidency and GDP would grow by 2.7% annually. Their forecast for maintaining the status quo is 7.2 million jobs and 2.3% GDP growth rate. more than expected under current law.

While there are plenty of differences in the candidates' tax plans, voters often do not choose based on policy. In a light-hearted take on how people make decisions and later rationalize them, this video shows the reaction of Clinton supporters in New York when they were told about Trump's tax plan proposals.