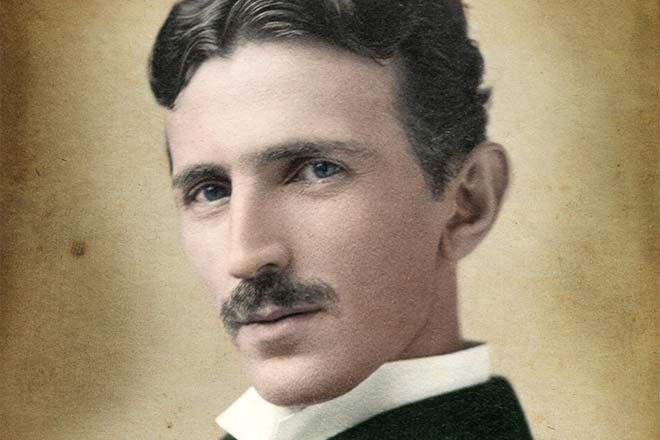 While Thomas Edison is known for several inventions (including the light bulb), he was also an astute businessman who was able to commercialize inventions and turn them into viable businesses. Nikola Tesla was just the opposite -- a prolific inventor who died penniless.

When Tesla first moved to the U.S., he idolized Edison and got a job working for him. However, they soon had a falling out and Tesla quit. An epic rivalry later developed between Edison and Tesla over alternating vs. direct current. In the early days of electricity, Edison owned patents related to direct current and was a proponent of using that technology for transmitting electricity over large distances. However, DC is unwieldy and alternating current (AC), which Tesla invented, proved to be a far superior technology for electrical transmission. 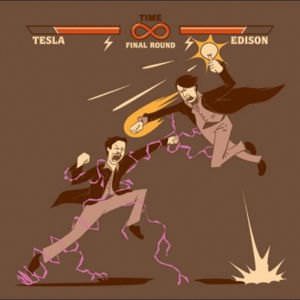 Thomas Edison was born in Milan, Ohio, as the seventh and youngest child of Samuel Edison Jr. and Nancy Matthews Elliot. He had three months of official schooling, before his mother pulled him out after his teacher called him “addled.” His mother then taught him at home. He had hearing problems due to scarlet fever as a child.

Nikola Tesla was born on July 10th 1856 in Smiljan, in the then Austrian Empire. His father was a priest in the Serbian Orthodox Church. He was the fourth of five children. In 1873, he contracted cholera and was bedridden for nine months. His father promised to send him to the best engineering school if he recovered. He evaded being drafted into the army by running away to Tomingaj. He enrolled in the Austrian Polytechnic in Graz and achieved high grades, but lost his scholarship grant and gambled away his allowance and did not graduate from his third year. 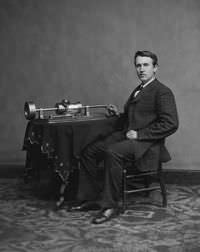 Thomas Edison and his early phonograph

Edison worked as a telegraph operator after he saved station agent J. U. MacKenzie’s three year old son from being hit by a train. At age 19, he moved to Louisville, Kentucky, where he worked the news wire for the Associated Press bureau. He was fired after experimenting with a lead-acid battery at work, when he spilled sulfuric acid on the floor. He began his work as an inventor in Newark, New Jersey, when he created an automatic repeater, but his first notable invention was the phonograph, which he invented in 1877.

In 1881, Tesla moved to Budapest to work at the Budapst Telephone Exchange. As the company was not yet functional, he worked in the Central Telegraph Office instead for several months, after which he received a chief electrician position at the Exchange. He began working for the Continental Edison Company in France, designing and making improvements to electrical equipment, in 1882.

In 1884, Tesla moved to work in New York City to work for Edison. Tesla was a great admirer of Edison at the time. In 1885, Tesla told Edison he could improve Edison’s inefficient motor and generators. Edison thought Tesla's ideas were “splendid,” but “utterly impractical.”, and apparently offered him fifty thousand dollars (equivalent to roughly $1 million today) if he could do it. Tesla succeeded, but Edison claimed the bet was a joke and only offered him a $10 a week raise on Tesla’s $18 a week salary. Tesla resigned. 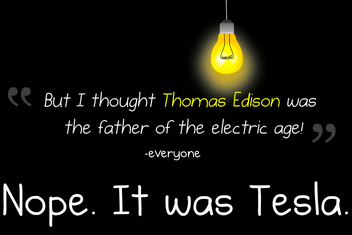 Web comic TheOatmeal published a tribute to Tesla in which he criticized Edison heavily for his role in the War of the Currents.

War of the Currents

After Tesla resigned, he raised enough money to found the Tesla Electric Light Company, where he developed patents for AC generators, wires, transformers, lights and motors. He sold most of his patents to George Westinghouse, who was also in a feud with Edison.

Edison and Tesla were both involved in the War of the Currents in the late 1880s, with Edison promoting the use of direct current (DC) for power distribution, for which he held the patents, and Tesla supporting AC current, as it allowed large quantities of energy to be transmitted to power large cities.

Edison spread misinformation about the dangers of alternating current through publicity stunts in which he or his employees electrocuted animals to demonstrate fatal AC accidents. Edison also lobbied against the use of AC in state legislatures.

George Westinghouse built a power plant at Niagara Falls to power New York City, and AC—clearly the superior technology—won out as the method of delivering power from power stations to homes. Although Westinghouse had an early lead in developing generators, motors and transmission equipment for AC, General Electric soon hired smart engineers, including Prussian mathematician Charles Proteus Steinmetz and closed the gap.

Edison's method of invention was relentless experimentation. Tesla, on the other had, preferred to work out the theoretical approach before implementing it with physical designs. When Edison died, coverage by the New York Times included this quote from Tesla that outlines this difference in approach for the two inventors:

If he had a needle to find in a haystack he would not stop to reason where it was most likely to be, but would proceed at once, with the feverish diligence of a bee, to examine straw after straw until he found the object of his search. I was almost a sorry witness of such doings, knowing that a little theory and calculation would have saved him ninety per cent of his labor.

Edison created the first industrial research lab in Menlo Park, New Jersey. Here, he invented the first commercially practical incandescent light and the carbon microphone that was used in all telephones until the 1980s. He also patented a system for distributing electricity in 1880 and founded the Edison Illuminating Company, which established a generating system on Pearl Street for all of lower Manhattan. A critical biography of Edison — The Wizard of Menlo Park: How Thomas Alva Edison Invented the Modern World — contends that Edison's greatest invention was his own fame, which he managed astutely to become "the first great celebrity of the modern age."

This YouTube video narrates a brief history lesson about the accomplishments of Thomas Edison, from early work with telegraphs to the lightbulb.

After resigning from Edison’s company, Tesla formed Tesla Electric Light & Manufacturing and began developing his ideas for alternating current transmission systems. His investors fired him from the company, but he then started Tesla Electric Company in 1887, where he made a brushless alternating current induction motor. He also demonstrated wireless energy transmission (known as the Tesla effect) and patented the Tesla coil in 1891. In 1894, he began experimenting with X-rays. His work was lost in a fire in 1895, but he went to develop many X-ray related inventions, as well as patenting an electrical transmitter that would come to be used in radio.

This YouTube video is a documentary about the life and scientific achievements of Nikola Tesla.

Tesla never married. He worked every day from 9 AM to 6 PM and walked to the park every day to feed the pigeons. He became a vegetarian in his later years, and became extremely sensitive to light and sound.

Edison was involved in business almost until his death. Months before, he had been involved in championing an electric train service in New Jersey. He died of complications from diabetes on October 18th, 1931. A plaster death mask was made of him.

Tesla died in New York on January 7th 1943. He died of coronary thrombosis. Despite his patents on AC power, he died penniless and in debt.

Edison’s views were based around non-violence. During World War I, he would only work on defensive weapons. He advocated monetary reform and was opposed to the gold standard and debt-based money.

Tesla was a proponent of a selective breeding and eugenics, through which he wanted to eliminate "undesirables" from the population by sterilizing criminals and the mentally ill.

Several places are named after Edison, including Edison, New Jersey and Thomas Edison State College. The Thomas Alva Edison Memorial Tower and Museum is located in Edison, New Jersey, and another Edison Museum can be found in Texas.

Tesla appeared on the front cover of Time Magazine on his 75th birthday in 1931. The Nikola Tesla Memorial Center opened in Smiljan in 2006. A monument was also established at Niagara Falls, New York.

Edison won the Matteucci Medal in 1887, and was elected a member of the Royal Swedish Academy of Science in 1890. He was awarded the Franklin Institute in 1915 for discoveries contributing to the foundation of industries and the well-being of the human race, and was awarded the Navy Distinguished Service Medal in 1920. He received a Congressional Gold Medal in 1928.